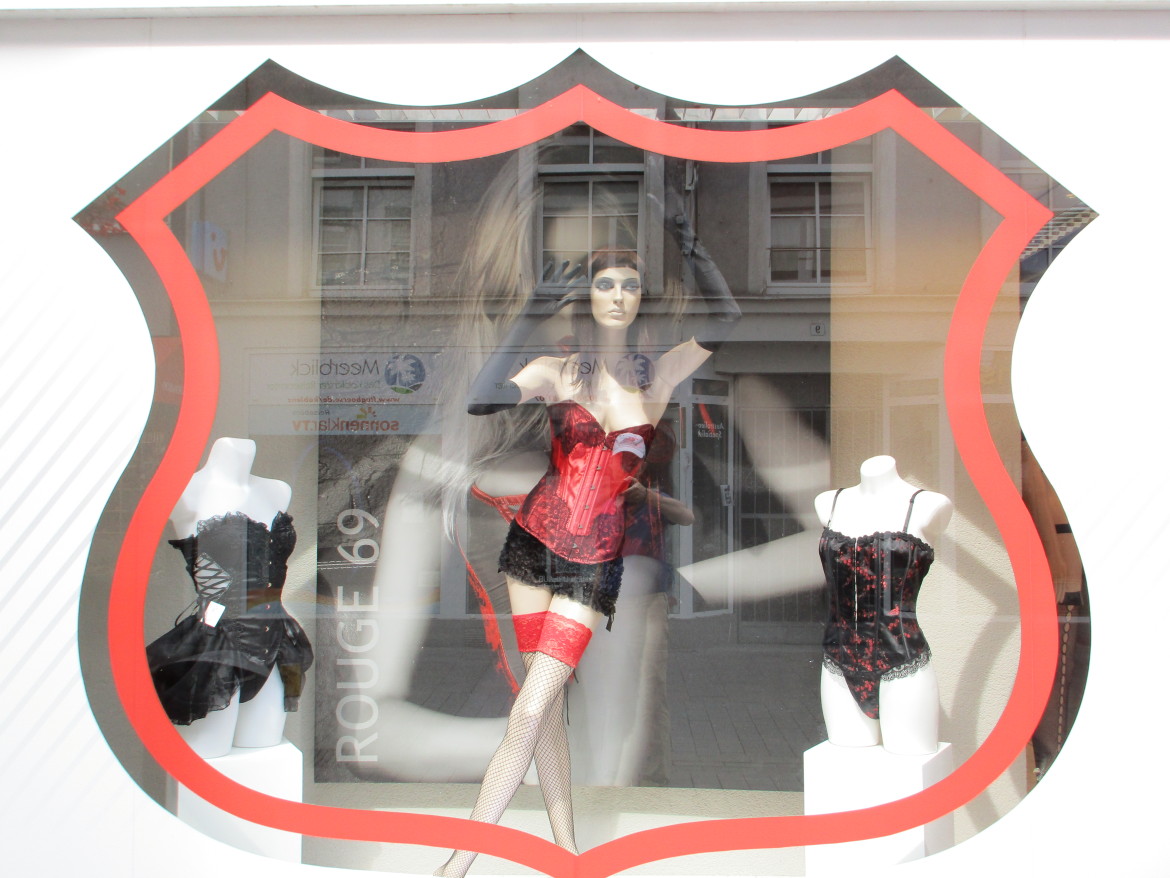 Anyhoo, on the way here from Frankfurt, we made a pitstop in the town of Koblenz, to catch a breather from the video-game craziness of the Autobahn and also to gas up the car (at $1.40/liter, or about $5.30/gallon). Geez, one measly trip to the middle of nowhere (Sondheim) and we’re already low on gas? Well, it seems our tank doesn’t hold very much, and besides that, when you’re motoring along at 160 kilometers per hour, fuel economy goes straight to hell in a handbag.

Oh yeah, the car. We promised to tell you about the car. It’s a sweet little BMW 3-series sedan. Drives like it knows where you want to go before you do. We got upgraded for free. Isn’t that cool?

We did not get upgraded. We are not driving a BMW. Or a Mercedes Benz either. Or even a Volkswagen.

In the months before the trip, each time we told someone we would be renting a car in Germany, we got a response like, oh wow, you’ll be driving on the Autobahn, right? In a sexy German sports car, right?

No, we had to respond each time, accompanied by heavy sighs. We’re not getting a German car. We’re supposedly getting a Spanish one. Yes, Spanish. Something called a Leon. It should be fine, we kept saying. It will have four tires and a steering wheel. It will have four doors, plus a hatchback for our luggage. And it won’t attract unnecessary attention. And hey, when you get a deal like we got – $425 total rental for three weeks including insurance and taxes (but sadly, not gas) – you don’t expect to be handed the keys to a Bentley. Which isn’t German either, by the way. But you get the point.

So we walked the three miles to the Avis store in the afternoon heatwave that Frankfurt was experiencing, wondering if we’d figure out how to drive back to the hotel without getting lost. (We succeeded at that, though only with the help of the Google gods.) But even before we entered the store, we could see that there was exactly one car parked out front, and surely that car had our name on it.

And that car was not Spanish. Or German. Or anything else European.

That car was a Ford Focus.

And yes, that was our car.

(You know how they always say, “…such and such make and model, OR EQUIVALENT” in the rental car contracts? Well now we know what the hell a Spanish Leon is equivalent to.)

We had a good laugh with the nice guy at the rental counter. He understood our angst (to use a very German word). We came all the way from America to drive a FORD around Germany? A fucking Ford Focus?

But as it turns out, it’s a sweet little car. It’s a jet-black Focus ST, a model that isn’t very popular in the States, maybe because it drives too damn sporty. With 250 horses it’s got plenty of pep. The handling is surprisingly nimble and the 6-speed manual tranny shifts like butter. The bolstered front seats are ridiculously comfortable and the console’s got a ton of electronics. Plus the car is brand spanking new. It even has new car smell. So we’re actually very happy with our car. The only question is, why can’t Ford build ’em this tight in America?

But we digress. We’re supposed to be telling you about Koblenz. After all, we did spend an afternoon there. Okay, why Koblenz?

Well, the main attraction is that the town lies at the junction of the Rhine and Mainz rivers. They cross at literally a 90 degree angle, like a traffic intersection. This may explain why their meeting point is called the Deutches Eck (the German corner). Naturally we had our photo snapped with the Eck in the background. It’s a touristy thing to do, but so what? We are tourists. And we look pretty good, don’t you think?

Another attraction in Koblenz is the unusual fountain in a quaint little square known as the Görresplatz. The fountain is called the Historiensaeule (History Column) because its several vertical layers tell the story of Koblenz since people first settled there 2000 years ago. Think of a modern-style totem pole and you’ve got the idea. But what people really love about this fountain are the comical characters at its base. The base is a boat, the type once used to ship wine in the region. Some of the boat’s characters are fated to continuously puke up the fountain water, while others simply appear exhausted from rowing nonstop. Again doing the tourist thing, we sat on the outer wall of the fountain and took selfies, while the locals stared wearily at us from the shade of their outdoor cafés as they enjoyed a Sunday afternoon Kaffee und Kuchen.

And then we got back in our spiffy new Ford and drove to Cologne. Which is the place we’ll tell you all about in the next post.

Unless it keeps raining. 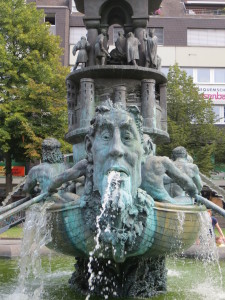 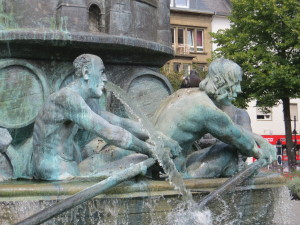 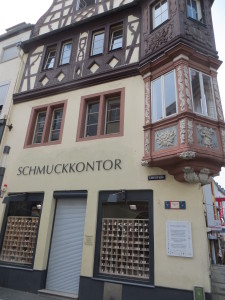