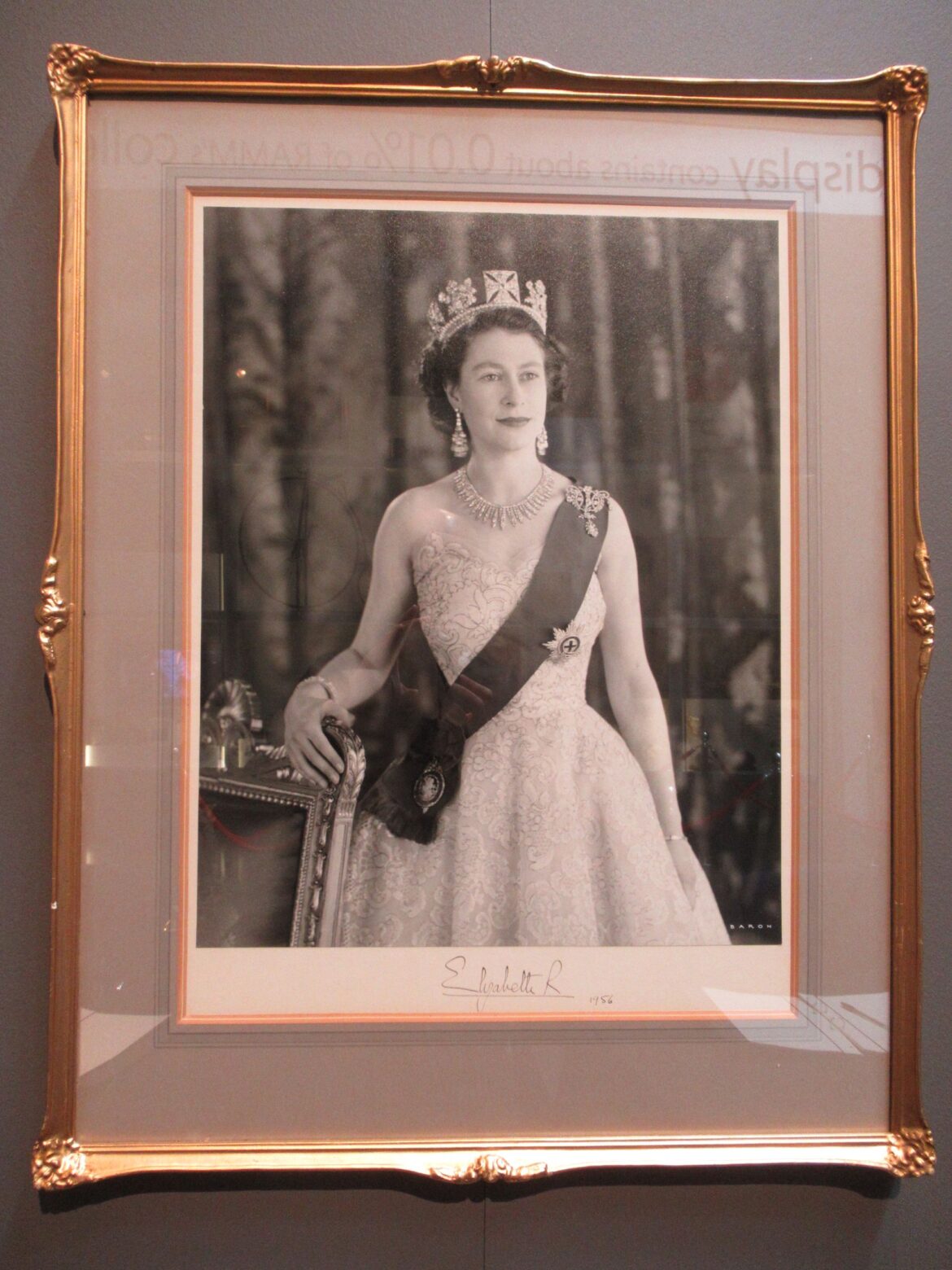 A photo of a young Queen Elizabeth on display at the Royal Albert Museum in Exeter.

George and I were browsing the tourist shops in Brixham when we heard the news that the end might be near. Brixham is a charming little seaside town along Devon’s southeast coast (also known as the English Riviera).

One of the shop owners in Brixham, having nothing better to do at the end of a sleepy midweek day with too few tourists for her cash register’s liking, told us sadly that even the prodigal Prince Harry had rushed to Balmoral to be with his grandmother. While the royal family gathered at her side, Her Majesty was apparently being “kept comfortable” by her doctors – a euphemism we all know a little too well.

By the time we got back to our hotel room in Exeter, she was gone. Queen Elizabeth II, the longest reigning monarch in England’s rich history, had passed away at the age of 96. Her son Charles, no spring chicken himself, was now King of the Brits – the oldest person ever to assume that throne.

We felt oddly privileged to be in England during such a poignant and breathtaking moment. Yet we also couldn’t help but wonder how it might affect our own little journey. Would the country shut down for several days of mourning? Would museums and historic buildings announce sudden closures, leaving us with nothing to do but wander empty streets lined with shuttered storefronts?

As it turned out, that wasn’t our experience at all. A couple of hours after the news of the Queen’s death broke, we were welcomed with smiling faces to a cozy basement wine bar where I’d reserved a dinner table several weeks earlier. The gregarious blond bartender who greeted us didn’t even wait for me to tell her what name the reservation was under.

“You’re the ones who emailed us from America,” she said with a grin. “I can tell by your accent.”

Inside the restaurant, a couple dozen 20- and 30-somethings were having a loud and happy time in an adjacent room. It appeared to be a planned gathering of some kind. Maybe a local club or business venture, or graduate students from the nearby college. We didn’t intend to eavesdrop, but their voices carried. Not once did we hear any mention of the Queen.

We spent the following day meandering around Exeter. Life in Devon’s second-largest city seemed to be proceeding as usual, with a few notable exceptions.

The muted responses we observed don’t necessarily mean that the people of England weren’t mourning in their own way. I’m sure they were. Seldom has the modern world seen such a durable and universally admired head of state. And though the people of Exeter seemed fairly unaffected, perhaps there were other locales where the grief was more palpable. In London, maybe, though by the time we arrived there, the funeral and related ceremonies were all over with. In any case, we got the sense that the Queen’s passing simply wasn’t having as much of an impact on the lives of everyday English people as we might have imagined.

There could be several reasons for this. One is that the Queen was, after all, pretty old. Her passing was sad, of course, but it wasn’t exactly tragic – not like the shocking death of her daughter-in-law Diana 25 years earlier. When people in their 90s die, we celebrate their abundant years as much as we mourn the end of those years. And the Queen, without question, led an incredibly interesting life as well as an exceptionally long one. So maybe the British people simply didn’t feel the need to mourn her in a particularly formal manner, the kind that would require a true pause from everyday life. Instead, they went out to their pubs and restaurants as usual, and perhaps raised a glass to their beloved, departed monarch.

Another thing is that Elizabeth, despite all her stature and accomplishments, was mainly a figurehead. Generations of Brits who grew up during her reign have come to view the royal family as pampered celebrities, not arbiters of their nation’s affairs. To them, Elizabeth was really the last of the old guard. Her life, and her death, matter to them a great deal – symbolically. But where real issues are concerned – for example the faltering British economy, Covid, the ramifications of Brexit, and Russia’s war on Ukraine – the Queen’s departure, and her son’s ascent, carry almost no weight at all.

Still, she was one hell of a woman, wasn’t she? A person of remarkable determination, capable of both great restraint and great empathy, and of enormous grace under pressure. So let’s raise a glass to her memory. Here’s to you, Elizabeth Alexandra Mary Windsor. May generations to come know and appreciate your story. May you rest in peace. And may God save the King.