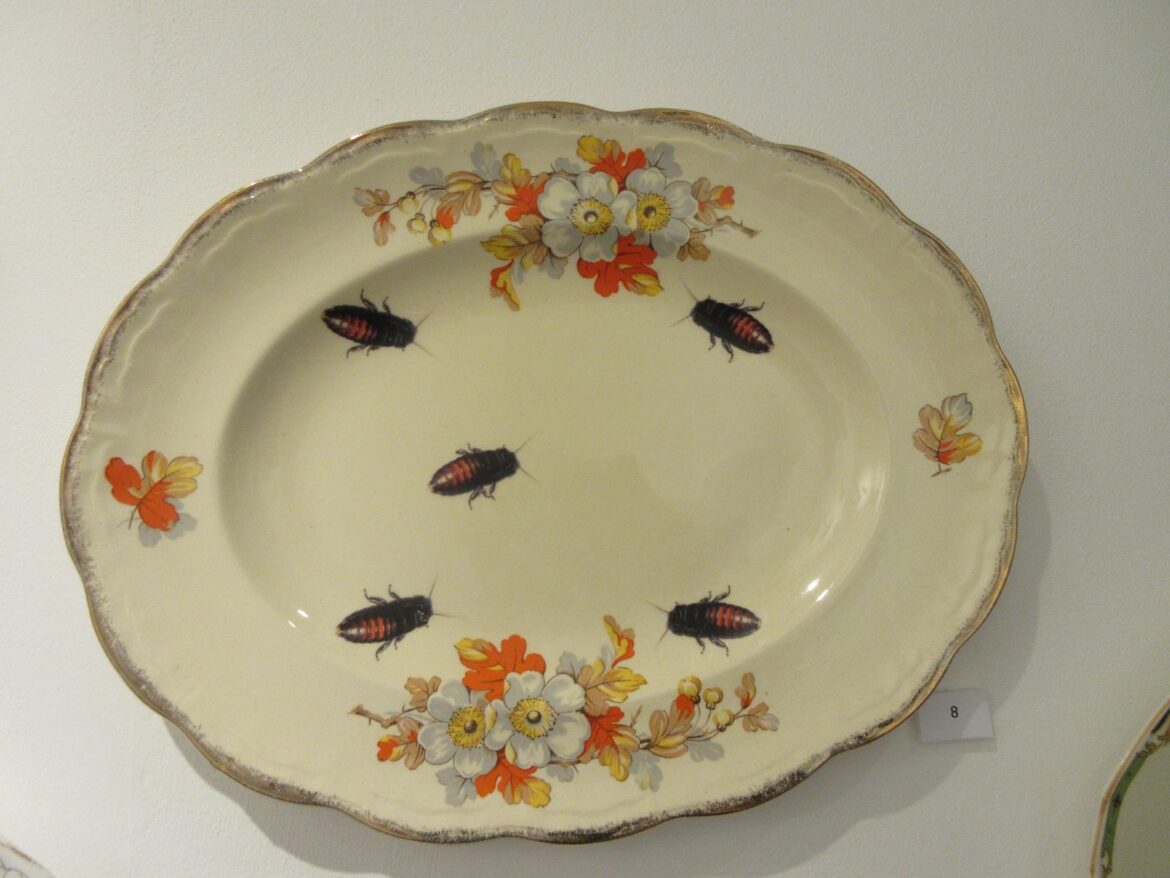 An artistically embellished dinner plate on display at the Salisbury Museum.

This latest round of blog posts is called “A Bit of England” rather than “A Lot of England” because of all the popular destinations we aren’t visiting. You might assume that we’d want to spend a couple of days up in the Lake Country, or maybe in York, or that maybe we’d take some time to drive out to Cornwall. And you would be right. Those are all places we’d love to visit. Some other time, hopefully.

For this trip, George and I decided to spend more time in even fewer locales than usual. We didn’t want to undertake the sort of journey we would need a vacation from after it’s over. I mean, driving around Ireland was loads of fun. But at times it was also nerve-wracking. The people in this part of the world tend to drive much too fast on roads that are much too narrow, even when it’s raining much too much (which it does much too often).

First on our list of chill spots was Salisbury, a relatively small town less than 2 hours by car southwest of London. (We picked up our rental at Heathrow Airport.) Most of the tourists in Salisbury arrive there as part of a visit to nearby Stonehenge. While they’re in town, they take in the magnificent and very old Salisbury Cathedral. But those points of interest were not at the top of our list. Instead, we were hoping to find the precise spot where Salisbury steak was invented. Surely that momentous occasion in human culinary history would be fervently celebrated by the locals. Surely we would find the namesake dish on the menu in virtually every pub and restaurant throughout the city.

Along the way, we did check out the cathedral. Built in the 13th Century, it’s considered one of the finest examples of Early English Gothic architecture. The spire, which was added in the 14th Century, is the tallest church spire in the entire United Kingdom.

As for Stonehenge, we didn’t bother with it at all. We’d been there already, and besides, nowadays you can’t go right up to the stones and touch them like you could years ago. Now you have to admire the mysteriously placed boulders from a distance. It’s still interesting to see in person, but I can no longer recommend it as a must-do.

As for the birthplace of Salisbury steak, we searched and searched but came up empty. It wasn’t on the menu anywhere in town, and none of the people we asked had any idea what the hell we were talking about. How could that be? Don’t the citizens of Salisbury take pride in their world-famous dish?

No, no they do not. And I‘ll tell you why. It’s because Salisbury steak didn’t originate in Salisbury at all. Turns out it’s an American creation, promoted by one Dr. James Salisbury in the 1890s as part of what he believed to be a healthy diet, rich in meats and other proteins.

I have a feeling the people of Salisbury would want nothing to do with Salisbury steak even if it had come from there. Let’s face it, most incarnations of the dish are pretty damn awful. I mean, it’s just ground beef shaped like a steak and then smothered in sauce to obscure its shameful secret. Why bother with such nonsense? You want a hamburger? Have a fucking hamburger. This is the golden renaissance of that ubiquitous patty sandwich, isn’t it? Upscale hamburger chains are the darlings of Wall Street. A million haunts in a thousand cities boast of serving the best burgers in town. You can even order a meatless hamburger at….Burger King! So who wants to chow down on a steak that isn’t really a steak, and that didn’t even come from the town it’s not named after?

Not us. We’ll stick to burgers. Although in Salisbury, as we discovered, the fish and chips are pretty good too.